Madagascar JR at Plaza's Outdoor Theatre | Kids Out and About Ft. Worth 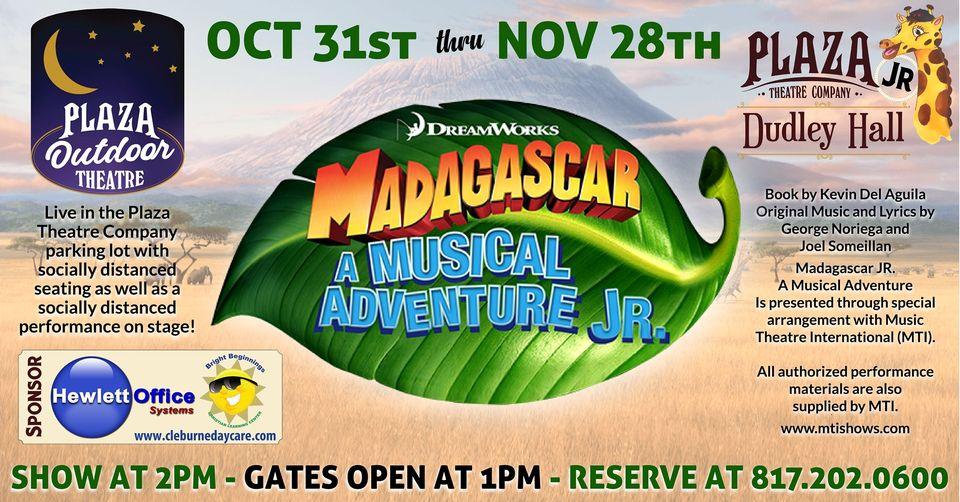 Plaza Theatre Company is pleased to announce performances of MADAGASCAR JR as part of it's Outdoor Theatre series. MADAGASCAR JR will play on Saturday afternoons only from October 31st thru November 28th. The parking lot will open for seating at 1pm with the show beginning at 2pm. Those attending may park in Plaza's North Parking Lot just to the north of Dudley Hall. Audience may bring chairs, blankets, coolers, food, drinks, (no alcoholic beverages) of their choosing but will be restricted to their own seating pod with members of their own party. The stage itself as well as all the seating pods will be marked for strict social distancing.
Click here for more information about this activity
Please help us keep this calendar up to date! If this activity is sold out, canceled, or otherwise needs alteration, email mindy@kidsoutandabout.com so we can update it immediately.

In compliance with Texas Governor Greg Abbott's order, a Covid-19 Mitigation Plan has been submitted and approved by local authorities and health officials which includes stringent protocols to protect both audience and performers alike. Both the performance itself and the audience will be in an open air, outdoor space and will utilize strict social distancing guidelines which will be followed to the letter.

NOTE - All performers on stage will be wearing protective shields and the backstage areas are being strictly socially distanced as well.
Join Alex the Lion, Marty the Zebra, Melman the Giraffe, Gloria the hip hip Hippo and, of course, those hilarious, plotting penguins as they bound onto your stage in the musical adventure of a lifetime. Based on the smash DreamWorks animated motion picture, Madagascar - A Musical Adventure JR. follows all of your favorite crack-a-lackin’ friends as they escape from their home in New York’s Central Park Zoo and find themselves on an unexpected journey to the madcap world of King Julien’s Madagascar.
Tickets for MADAGASCAR JR. are $10 for adults and $7 for children 12 and under. Due to the potential of inclement weather or possible illness among the cast and crew, tickets will be sold at the door on a first come - first served basis only though reservations ARE available by calling 817-202-0600. Per the approved plan, no more than 100 seats will be sold to each individual show.

*Times, dates, and prices of any activity posted to our calendars are subject to change. Please be sure to click through directly to the organization’s website to verify.

All Ages Adults & kids together