A (Virtual) Christmas Vacation with the Griswold’s: An Evening with Chevy Chase and Beverly D’Angelo | Kids Out and About Ft. Worth

A (Virtual) Christmas Vacation with the Griswold’s: An Evening with Chevy Chase and Beverly D’Angelo 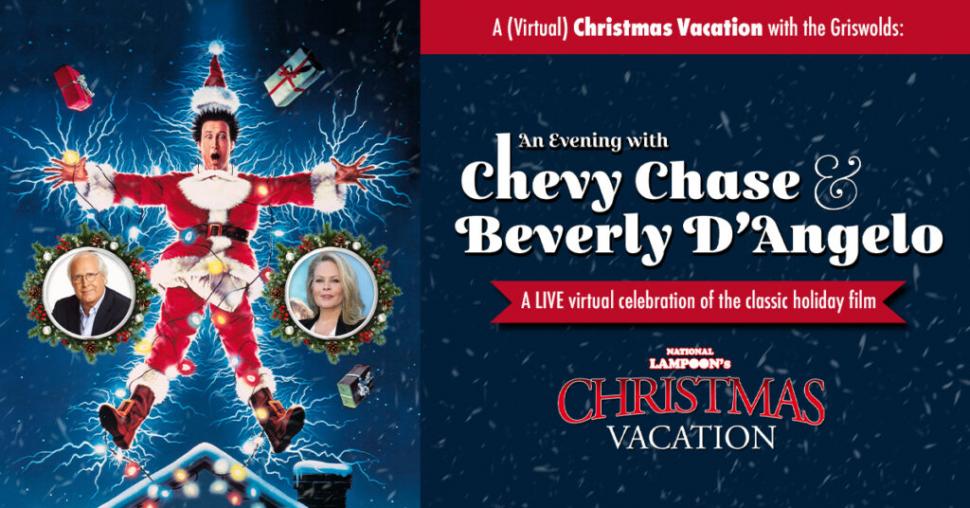 Light up your holidays and join Christmas’ favorite couple, Ellen and Clark Griswold for this virtual salute to the holiday classic, National Lampoon’s Christmas Vacation. Chevy Chase (Clark) and Beverly D’Angelo (Ellen) lead audiences through this live event as they share fan-favorite clips from the movie, reveal their favorite memories from the making of the Vacation franchise and answer your questions in a live audience Q & A.
Click here for more information about this activity
Please help us keep this calendar up to date! If this activity is sold out, canceled, or otherwise needs alteration, email mindy@kidsoutandabout.com so we can update it immediately.

Perhaps best known for her portrayal of Ellen Griswold in the National Lampoon’s Vacation franchise, actress-singer Beverly D’Angelo has had an accomplished career spanning over four decades. Her acting resume includes roles in over 60 films and appearances in some of pop-cultures most celebrated television series including The Simpsons, Law & Order: SVU and Entourage.

Fans can expect the unexpected as these legends share a no-holds-barred trip down memory lane and unveil the behind-the-scenes secrets of the making of a blockbuster film franchise.

Add a new twist to your holiday tradition—gather the family and cozy up on the couch as we stream the Griswolds directly to your living room for this live virtual event that is fun for all ages. Chestnuts and eggnog recommended!

$25 USD per household (includes one device, and as many viewers as you’d like)

$150 USD VIP Experience
(An Evening with Chevy Chase & Beverly D’Angelo is produced by Passport Interactive, a US based entertainment company. As such, all prices are listed as US Currency.)

*Times, dates, and prices of any activity posted to our calendars are subject to change. Please be sure to click through directly to the organization’s website to verify.