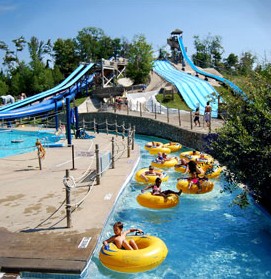 A well-run, relaxing, reasonably-priced water park that caters to parents as well as kids

My daughter Ella and I spent two fully delightful days at the Enchanted Forest Water Safari theme park as part of a fun and relaxing long weekend in the Adirondack Mountains. The park has abundant and varied rides and, on our visit during the last weekend in June, virtually no waiting lines.

To my 9-year-old, Enchanted Forest Water Safari was the paradise that she'd expected. The park is also gleamingly clean, safe, physically attractive, reasonably-priced, and pleasantly mellow--making it a parent’s paradise, too. The fact that it's in a charming Adirondacks town on a gorgeous lake in the midst of quiet, beautiful woodland, is a wonderful bonus.

The main features of the park are its Water Safari water attractions. Our favorites among these were the Amazon, the Black River, the Rondaxe Run, and the park’s newest water slide, the Curse of the Silverback. You ride tubes in all of these; through a simulated Brazilian forest, through mysterious dark tunnels, back into sunlight along the sides of a huge bowl under the influence of centripetal force until you slow down enough to be drawn into a huge drain and thus sent on your way to more twisting tunnels. These and the numerous other centerpiece rides are exhilarating without seeming scary to an adventurous 9-year-old. 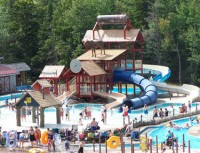 For young children, there’s The Sawmill, a wonderful multi-level system of treehouse-like platforms with tame-but-fun waterslides, with a wading pool at its base. The whole thing is drenched by the emptying of a huge water barrel every few minutes. There are other wading pools, plus the Tadpole Hole, a scaled-down version of the Serengeti Surf Hill water slide. Little kids can also ride many of the gentler tube rides with their parents; among these is the Safari River Expedition: a lovely, long, winding “lazy river” circuit around the entire park that is all at ground level. The Tidal Wave Pool was a surprising hit with Ella, we spent easily an hour and a half bobbing up and down in it over our two days.

The Enchanted Forest bit of the park, the part with which the park started in 1956, is still there. This section of the park starts with a huge statue of Paul Bunyan—because of the region’s history as a logging center—and continues all along the southern edge of the park—Storybook Lane—past Sleeping Beauty’s house, Peter’s Pumpkin, the Crooked House of that Crooked Man, Contrary Mary’s growing garden, and handsome depictions of many other fairy tale characters and locales.

Storybook Lane ends at a compact but well-stocked amusement park that occupies the west end of the park. It includes a carousel, bumper cars, tilt-o-whirl, two Ferris wheels, and five or six other rides. Being able to switch from the water rides to the amusement park rides allowed us to change the pace, which we did several times each day. Except for the bumper cars—kids have to be 42” tall to ride those, 48” to ride them alone—even the youngest child can ride any of the rides with a parent, and can ride most of them alone.

You can also get from the park’s entrance to the amusement park section via the Enchanted Forest Railroad, a charming miniature railroad train. 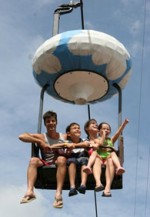 Ella and I loved the Sky Ride, a ski-resort-style chairlift that gives you a 5-minute ride high in the sky over the park. It’s fun seeing the park from above, the view of the surrounding mountains is lovely, and you should go barefoot so that your feet get tickled by the leaves of the trees whose tops you just barely skim. (Some have had their branches pruned so that the Sky Ride chairs fit through.)

We also enjoyed the Circus Show, an outdoor comedy, juggling, trampoline, & trapeze show. This half-hour show is presented twice a day. It features the Cristiani Comedy Trampoline, Juggling and Hula Hoop Act and the Flying Cortes Trapeze and Aerial Cloudswing Act. The comic bits were genuinely funny in just the pleasantly corny way circus shows should be, and the acrobatics were fun and impressive.

How long should you spend at Enchanted Forest/Water Safari?

My daughter would have been ecstatic to have spent two days in the water park alone. Our being able to intersperse trips down the waterslides with amusement park rides, trips over the park on the Sky Ride (we must have done this 5 or 6 times over the two days, at Ella’s request), a train ride and a Circus Show, enriched and enlivened the experience immensely. After two days at the park we felt like we could easily have spent another full day without risking any sense of boredom.

On the other hand, suppose you only have one day to spend at Enchanted Forest/Water Safari: Should you do it? My answer is an unequivocal yes. Even if the park is crowded, you and your kids should still be able to sample everything and feel that it was time well spent.

Enchanted Forest/Water Safari suffers from none of the problems I worry about in connection with water parks and amusement parks. It’s clean, almost impossibly so. Visitors must throw the occasional Coke can or candy wrapper on the ground, but the staff must be endlessly and stealthily on watch for litter, because there seemed to be none. That staff was also clean and alert and well-groomed, they were smilingly helpful whenever we had questions, and they were sweetly, gently, attentive in helping us and others into tubes and out of them and the like. I also worry about rowdy teenagers or others engaged in inappropriate behavior at such places; there was not the vaguest hint of anything like this during our stay at Enchanted Forest/Water Safari.

Ella and I stayed at the Water’s Edge Inn, which is right across the street—a three-minute walk—from the Enchanted Forest/Water Safari. It’s a clean and handsome hotel, decorated in a rustic manner appropriate to the setting. Not cheap at $125 a night, but not unreasonable either. The continental breakfast was modest, but good. The park is right at the edge of the town of Old Forge, so there are lots of other hotels nearby, too. 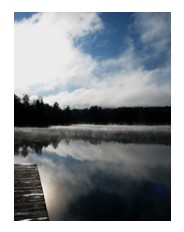 Its proximity to Old Forge, in the Adirondacks, right at the southern tip of the Fulton Chain, makes Enchanted Forest/Water Safari doubly wonderful. Ella and I ate our lunches and dinners in charming restaurants and rustic diners. We surveyed Fourth Lake from the Eagle Bay shore, and decided that the lake was shortchanged; it surely deserves at least as romantic a name as the bay. We had ice cream with several other families next to the covered bridge over the lake outlet, where we watched ducklings and their mother waddle precariously along the dam. We sat on a balcony overlooking the lake each evening before bedtime, as the sun set. We explored the very neat Old Forge Hardware Store where we got a dollhouse-sized chair—guess what type—as a gift for Ella’s sister. We hiked up Bald Mountain early Sunday morning and took in the breathtaking view from the fire tower.

Did Water Safari live up to its billing?