Review of Peppa Pig's Big Splash, the Tour | Kids Out and About Ft. Worth

With an Oink! and a Snort!, Peppa Pig and her puddle-jumping friends charmed preschoolers with a big splash in Salt Lake City at the Maverik Center during their first U.S. tour. Utah’s stop came early in the tour, in March 2016, and local fans of the British cartoon were delighted to welcome their favorite “cheeky” pig, some of the regulars from her show, and Daisy, a new live facilitator to interact with the children and characters. The tour continues through April, ending at New York’s Beacon Theatre.

If you’re a fan of the cartoon show, you know Peppa, her brother George, Daddy Pig, Mummy Pig, and other lovable cast members are always on an adventure. This time they’ve organized a fair to earn money to fix the school’s leaky roof. A contest to see who can make the biggest muddy puddle splash is the highlight.

Unlike the cartoon version, which can appeal to an older audience as well (at least it does in our family), the traveling show is definitely for kids 5 and under. Daisy leads the crowd in pretend games of hide-and-seek, looking for George’s lost dinosaur, and lots of stretches and activities to get the wiggles out.

The kids in the audience don’t seem to mind the most obvious transition from the cartoon to the live show—the puppeteers. They’re dressed in black, and they stand or crouch behind the kid-size puppets of Peppa and her friends. Daddy Pig and the other grown-ups are adult-size costume characters. The show’s director, Richard Lewis, purposely chose not to use costume characters for all the roles, saying, “We didn't think that would properly reflect the innocence and cuteness of the enterprise." He continues, "The reason Peppa captures audiences all over the world is that it appeals to that part of childhood that's about gentleness and safety; we didn't want to betray that.”

Professional puppeteers are visible during much of the performance.

Our family’s reaction to the show? I enjoyed it because my 3-year-old son loved it. If we had a do-over, my husband and older son (over 5) would have chosen another activity. We did not read any reviews beforehand and did not know the intended audience age.

The characters you love

My family adores the cartoon show: We find it to be a riot. We love all the British colloquialisms. We sometimes use them at home to gain favor with the kids. Somehow “Would you please take out the rubbish?” gets a much better response than garbage. So we were hoping for more quaint foreign vocabulary in the production, but it wasn’t there, unless you count them attending the fete. The script was pretty much Americanized—for the little ones.

We were also disappointed that Daddy Pig and Mummy Pig didn’t make more appearances. Daddy Pig is featured, and he’s the only character to make a noticeable costume change. Mummy Pig, however, is barely introduced. We would also like to have seen Grandpa Pig and Granny Pig. Obviously, the director couldn’t put every character on stage, but we missed some of the regulars.

Everyone but the youngest in our family thinks the puppets could have been more upscale. In our most humble opinion, they were too basic. George does squirt out water tears (possible spoiler alert, sorry), and there is some mouth motion, but that’s about it. They compare, in my opinion, to the puppets of the ride It’s a Small World at Disneyland. We don’t understand the director’s explanation for not using costume characters, but we are hopeful that a subsequent tour might offer upgraded puppets. 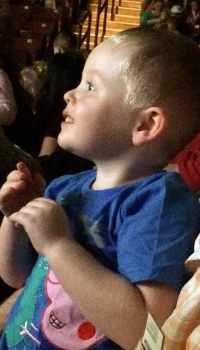 If I could do the night over again, what would I do? I’d take my 3-year-old and I’d partner with a friend and her youngsters, leaving husbands and older kids to enjoy a different activity. Peppa Pig fans 5 and under, old enough to know who she is and love her, will love her traveling tour.

Kerry Smith, Salt Lake City editor for KidsOutAndAbout.com, and her husband, Cole, are proud of their two sons. Join her at GoBeyondAutism.com and on Facebook for ideas to strengthen your family.